7.3. Seasons and Weather of the English-speaking Countries

1. Look at the photos and guess in what country you can find these wonders of nature.

Example: We can see the Niagara Falls in the USA and in Canada.

the rhymes and practise the sentence stress. Say what message these rhymes convey.

Example: I can see a blossoming orchard. ->

2. Where can you see blossoming orchard?

3. Who can see a blossoming orchard?

1. Taras has taken many pictures in Canada.

2. We visited our International friends.

4. Olgha made a tour of Britain last summer.

5. Boghdan is in New Zealand now.

6. My family will go to the USA next year.

2. In pairs, make up a mini-dialogue round its middle part.

– I know for sure that there is much snow in Canada.

3. Look at the pictures and fill in the, a, if necessary, and add two logically connected sentences.

It isn’t warm in winter. But there is much snow. Boys like to play hockey and ski in Canada.

You can… Chernomorets in… Black Sea.

It is very hot in… summer in… Australia.

… London is situated on… Thames.

… New Zealand and… Australia were discovered by… James Cook.

1. Match the adjectives to the nouns and make up sentences with them.

Example: The weather is so changeable in spring.

2. Read the description of seasons and guess what country it is about.

Fill in correct names of months and seasons.

Many people come to this country on its winter months to have their rest from… .

3. Look at the pictures and say what season is especially thrilling in Canada, Australia, Britain, New Zealand. Say why you think so (p. 199): 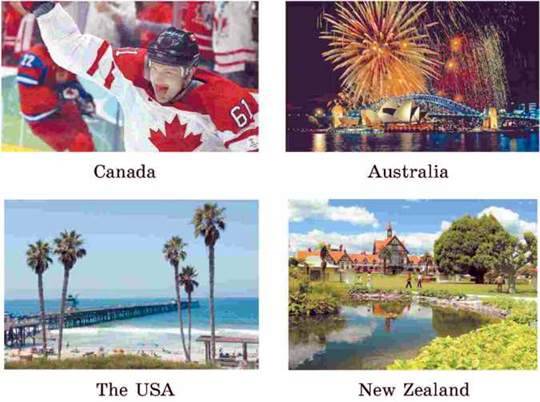 Example: / think winter in Canada is especially thrilling. The Canadian hockey team is one of the best in the world. They can make a real sensation.

At home: Write a description of any season in Australia and say why you’ve chosen it.

Read the story about the Canadian orphan girl, Anne Shirley, who comes to live with the Cuthberts, Marilla and Mathew, on their farm. She helps them with the farm work at Green Gables and goes to school. Name three symbols of Canadian spring.

Spring had come once more to Green Gables – the beautiful, changeable Canadian spring, with sweet, fresh, chilly days and with pink sunsets. The maple leaves were about to appear. The Mayflowers were blossoming, pink and white stars of sweetness under their brown leaves. All the school girls and boys were gathering them one afternoon.

“I’m so sorry for people who live in lands where there are no Mayflowers” said Anne. “Diana says perhaps they have something better, but there couldn’t be anything better than Mayflowers, could there, Marilla? And Diana says if they don’t know what they are like they don’t miss them. But I think that is the saddest thing of all. I think it would be tragic, Marilla, not to know what Mayflowers are like and not to miss them. Do you know what I think Mayflowers are, Marilla? I think they must be the souls of the flowers that died last summer. But we had a splendid time, Marilla. We had our lunch by an old well – such a romantic spot. Mr. Philip gave us the Mayflowers he found. We made wreaths of his Mayflowers and put them on our hats; and when the time came to go home, we marched with our beautiful bouquets and wreaths, singing “My Home on the Hill”. Oh, it was so thrilling, Marilla. Everybody we met on the road stopped and stared after us. We made a real sensation”.

…After the Mayflowers came the violets and the fields were full of them. Anne walked through them on her way to school with admiring eyes as if she stepped on the ground. She was trying to think of a name for a new island Diana and she had discovered up the brook. “It’s the most picturesque place, Marilla. There are two maple trees on it and the brook flows right around it. At last it occurred to me that it would be splendid to call it Victoria Island because we found it on the Queen’s birthday”.

2. Read out of the text the sentences which characterize:

Say how they help to describe the girl’s feelings.

3. Look at the picture and say why the girl couldn’t help admiring this place and how she decided to call it. Why? Use: 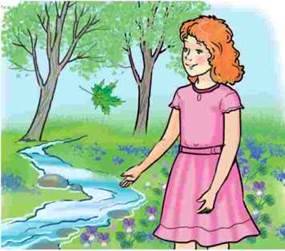 – a field with violets;

– to look at something with admiring eyes;

– to step on the ground;

– to be the most picturesque place;

1. Act as Anne and give a description of Canadian spring. Begin with:

– One day all the schoolgirls and boys… .

– I think mayflowers are….

2. In pairs, discuss the beauty of spring in Canada and Ukraine. Use the pattern.

A: I think there can’t be anything better than… .

A: Do you think spring in Ukraine… ?

B: Sure. It is so thrilling and besides… makes a real sensation.

Take a photo (picture) of your favourite season and describe its beauty the way you feel it.